The Rinpoche Bagsha temple crackled with the deep murmur of Buddhist prayer. Under the gaze of a golden cross-legged Buddha, eight monks in crimson robes sat at a low table in the centre of the room, ethereal chants bursting from their throats. A bell tinkled. During the final prayer the congregation, squeezed together on benches close to the monks, picked up parcels of food and waved them in front of themselves in clockwise circles. The bell tinkled one last time.

And with that, a hundred Russians put on their hats and coats, and came outside to where six marshrutka buses were waiting. The driver took their 20 roubles before taking them down the hill to Soviet Square. So begins a Sunday evening in the republic of Buryatia, Eastern Siberia’s Buddhist province.

A country of rolling hills between the southern shores of Lake Baikal and Russia’s frontier with Mongolia, Buryatia spans a territory as big as Germany, but fewer than a million people live here. Half of them are in Ulan-Ude, the Trans-Siberian stopover and capital of the Buryat people. Buryats are of Mongolian stock, nomadic herders with a language and culture close to their cousins across the border. They lived alongside each other for centuries, when Mongol khans governed the lands around Baikal. But living inside Moscow’s orbit for generations – first in the Buryat-Mongolian Autonomous Soviet Republic, then as Russian citizens – has changed their identity. Buryatia is at once Russia, Siberia and Mongolia.

At Rinpoche Bagsha, on top of one of the hills north of Ulan-Ude, Buryat identity is felt strongly. The complex is built in the form of a Tibetan datsan, a school as well as a temple. Its teachings are from the Vajrayana school of Buddhism practiced in Tibet and Mongolia. As the first buses leave, some people stay behind for the monks to bless their food. Some stay to offer more prayers – first stood facing the Buddha with palms touching above their heads, then prostrate on their stomachs on the carpet. They leave the airy, pastel-coloured hall walking backwards, so as not to turn their backs on him.

Buddhism has flourished in Buryatia since 1991, and dozens of schools have opened. Buryats of all generations come to services at Rinpoche Bagsha, from young children to the elderly. The mood is powerful and genuine, even if the building, opened in 2000, is a lightweight replica of a Tibetan datsan. Governments of republics within the Russian Federation often only pay lip service to religion; the breezeblock temple, it feels, could be turned into a kindergarten or a ballet studio at a couple of nights’ notice.

But outside in the temple’s grounds, Rinpoche Bagsha is a true Little Lhasa. The view from the summit is breathtaking: the wilderness of Transbaikal – Irkutsk to the north, the republic of Tuva to the west, Chita region to the east – beneath an oversaturated dark blue sky. A mountain wind rips through a row of brightly-coloured prayer flags. Cast-iron prayer wheels rasp against fingers in the Siberian cold, while boards display Buddhist mantras in Russian, encouraging patience and hard work. A separate building houses the temple’s museum: its walls are covered with photographs from the Dalai Lama’s visit to Buryatia in 1991, and other photos from trips the monks of the datsan have made to Moscow and St. Petersburg. There is a gift shop and a café with souvenirs and cheery Tibetan folk music.

Down the hill in Ulan-Ude it’s easier to feel that you are in Russia. Almost everyone talks in Russian, and two thirds of the people are ethnic Russians. Lenina street, a pedestrian zone of pharmacies and beauty salons and cafeterias and young families strolling about, is a very Russian format. The voice of the tannoy ushering people into the chaotic Galaxy mall on Baltakhinova street is the same man I had heard outside a mall in Arkhangelsk the week before, and in Moscow before that. A Communist Buryatia newspaper trampled into the snow on Gogol street offers congratulations on Russia’s Students’ Day. Kuybysheva street is a collection of old wooden Siberian cottages, most repainted colourfully in bold blues and greens and with white window-frames. They survive from the time of the Tsars, when Ulan-Ude – or rather the settlement of Verkhneudinsk – was a Russian trading post on the way to China.

On Soviet Square in the middle of the city is the landmark that gives Ulan-Ude its quaint claim to fame: the world’s largest sculpture of Lenin’s head, which serves as Buryatia’s calling card on the Trans-Siberian Railway. The head, eight metres tall, is known outside of Russia too: the then supreme leader of North Korea Kim Jong-il (himself a man of Eastern Siberia; he was born outside Khabarovsk) travelled here shortly before he died in 2011, especially to pay his respects to Lenin. But Ilyich wasn’t always so popular. The story goes that the sculpture was commissioned in 1971 to mark the centenary of Lenin’s birth, and shipped to Canada, where a delegation from the Soviet Union was taking part in an exhibition. When the 42-ton Lenin returned home, Ulan-Ude was the only town in the land that Moscow could persuade to take him. This impulse buy struck a chord with me. As someone who first came to Russia as a twenty year-old student, I understood the need to take home a discarded Lenin head, and display it somewhere your guests can’t miss it.

If the air inside the Rinpoche Bagsha temple crackles with prayer, creating energy, then during a service at Odigitrievsky cathedral the sound waves soothe you. Each deep ululation of the priest, followed by a chorus of high mesmeric song from the congregation, makes your heart slow down until you are frozen to the spot. The cathedral was built over 44 years in the 18th century with money donated by Cossack merchants. It stands at one end of what is now Lenina street, close to the spot where the two rivers that run through Ulan-Ude, the Uda and the Selenge, almost meet. During the Soviet era Odigitrievsky cathedral was converted into an anti-religious museum – a cruel trick on the place that has always been the home for Ulan-Ude’s Russian Orthodox community. Now though, Christenings and other events take place on its ground floor, and services are held every morning and evening in the church above.

In other parts of Ulan-Ude, Buryatia’s cultures blend together. At Cafe Kheseg on Kommunisticheskaya street, Buryat families come in for a brunch of boovo (small, hard doughnuts served in a puddle of condensed milk) and blinchiki, as Russian and Mongolian ballads alternate on the stereo. Souvenir shops sell Mongolian handcrafts beside packs of Sagan Dalya, a potent medicinal Siberian tea. Tables at the outdoor market are piled with Soviet textbooks and fur socks from Ulaanbaatar. A statue on Lenina street depicts two fish with their tails entwined to form a circle; this is an auspicious symbol in Buddhism, representing freedom and happiness, and here they are made into omul salmon, native to Lake Baikal.

But the more people I spoke with, the more I realised that only outsiders fixate on Burytia’s location. Buryats don’t see themselves as just a legacy of their republic’s past lives. While Russia and Mongolia overlap in Ulan-Ude, when it comes to people’s tastes and identity, globalisation is playing as great a role as either of them.

Tracking down an exhibition of paintings by Buryat artists, finding it on the second floor of a plush apartment block in the centre of town, its door was locked. The babushka at reception told me the apartment-gallery has so few visitors that it is almost never open. But there was one sign of life in the corridor outside: a eucalyptus plant growing out of a paper Subway cup. I walked to the address of a cafe said to serve the best Buryat food in Ulan-Ude. It doesn’t exist anymore. With no buuzo dumplings in sight I had some cheesecake up the road at Marco Polo restaurant instead. At a bar called Yurta (The Yurt) close to Soviet Square I wanted to hear some Buryat music, and try tarasun – a vodka made from horse’s milk. They had imported beer on tap, and Ed Sheeran on the radio.

It’s a small world now. In the rolling hills between the southern shores of Lake Baikal and Russia’s frontier with Mongolia, the Buryat people eat at Subway, and listen to Ed Sheeran.

The place where the Buryat way of life is being cared for is only half an hour’s drive north of Ulan-Ude, in the district of Verkhnyaya Berezovka. The Ethnographic Museum of the Peoples of Baikal is a portion of the wilderness punctuated with model villages, each dedicated to the culture of one of the tribes who populate the vast Baikal region – Buryats, Evenks, Soyots, Cossacks and Old Believers. The Buryat settlement has a traditional ger made from wood and animal skin, and an old Buddhist temple. To get to the villages you walk through a wildlife sanctuary, where a Siberian tiger, a pack of wolves, wild red foxes and Bactrian camels roam free. After wandering through the villages, Buryat families warm up in the museum cafe.

On a winter night in Eastern Siberia, with a six-hour flight back to Moscow before dawn, a long walk to the edge of the city should have been the last thing on my mind. But before I could say goodbye to this place, I needed two things: a plate of buuzo, and another sight of a housing block on the way to Rinpoche Bagsha. There, fixed to the roof of the building, is a slogan in big red letters: “Ulan-Ude – star of my Buryatia!” 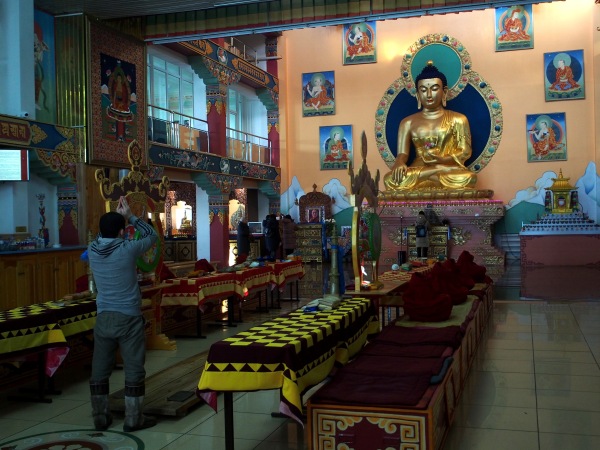 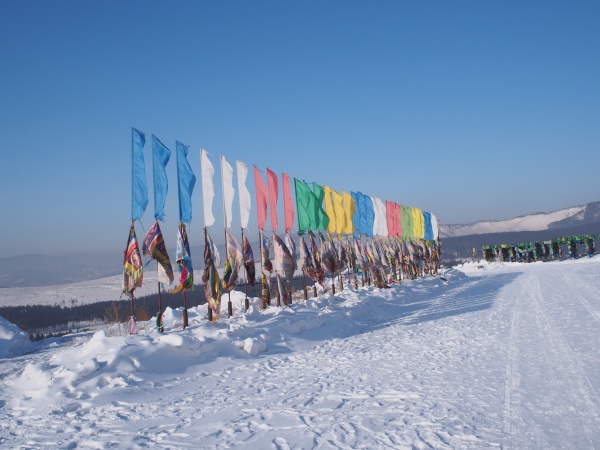 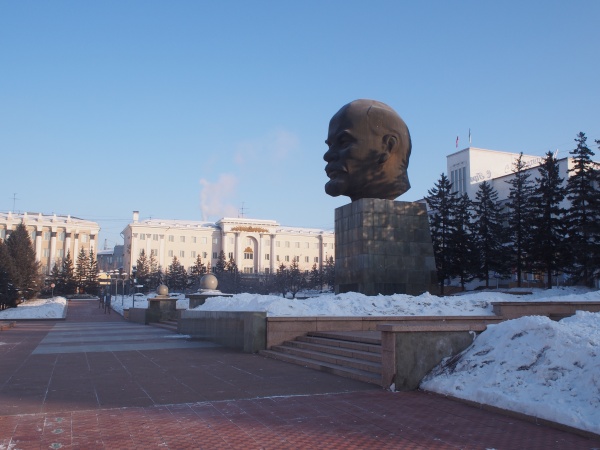 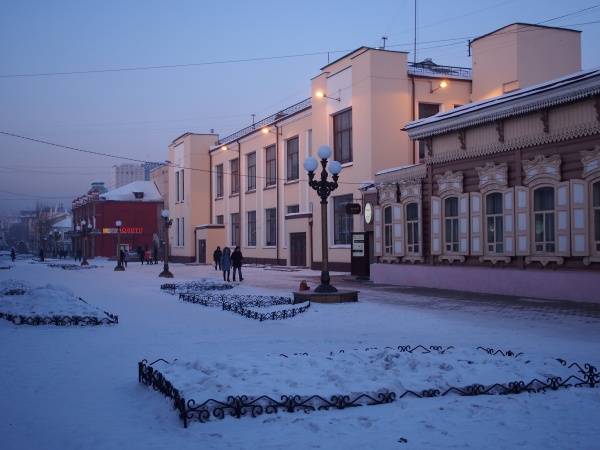 More from Russia / Eurasian Echoes home / Get in touch

2 thoughts on “Letter from Ulan-Ude (Republic of Buryatia – Siberia, Russia)”