In a moment of outrageous good luck, in 2016 I was offered a job as a wine & spirits market analyst. My job for the next three years was to travel to the countries of the CIS region to meet with alcohol companies – from vodka producers, to importers of whisky, rum and wine, to local vineyards. I met hundreds of people, in luxury offices and decrepit warehouses from Tbilisi to Tashkent, and learned everything about what people in the former Soviet republics drink.

The analysis part of the job was collecting data and writing reports. I didn’t need to try the drinks I was writing about.

Which isn’t to say that I didn’t…

The main street in Kazbegi

It’s long past midnight in a rugged little town high up in the Caucasus Mountains, and I’m lying on my back in the middle of an icy street, gazing up at the stars. There is freezing air in my lungs, a mountain climb in my legs, and half a bottle of chacha in my veins. I am so happy I can’t move.

I arrived in northern Georgia from Tbilisi the night before, and booked a room in a guesthouse in Stepantsminda (also called Kazbegi), to make the trek up to Gergeti Trinity Church – one of the most beautiful places in the Caucasus.

Back in Kazbegi, ravenous from the hike, I go to the tavern on the main street for khachapuri – Georgia’s adored oval-shaped bread with a warm puddle of suluguni cheese and egg on top – and a jug of homemade red wine.

Then the host asks me if I want a glass of his homemade chacha, the national spirit: a rough, over-proof clear brandy made from grape skins. When a Georgian asks you that question, there is only one answer you can give. Throughout the evening he asked me many more times.

Eventually he asks me to leave the bar so he can go home.

I remember the euphoria of laying on the icy road outside the tavern, blowing chacha out of my lungs. The next thing I remember is how my head felt the next morning, still looking up at the mountains, but now, somehow, in my bed. 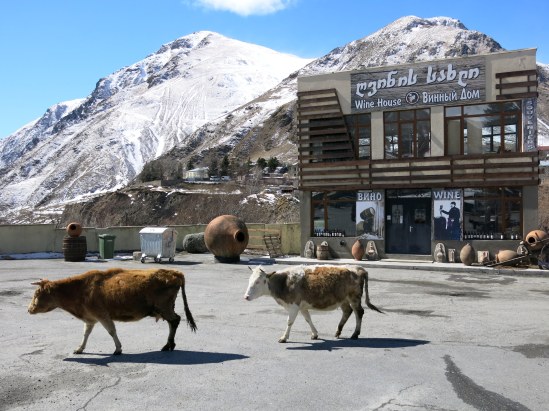 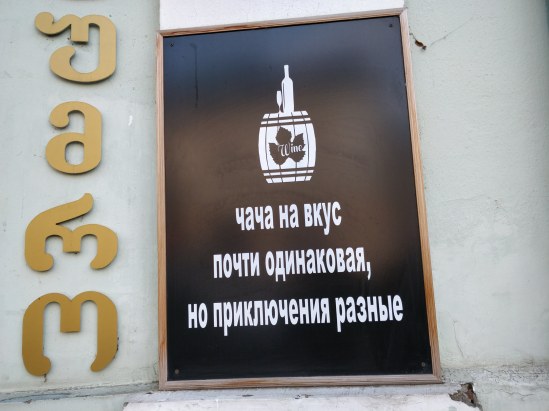 The evening began with a soak in the Abanotubani sulphur baths. Before I step into my chamber, a private steam room with walls made from blue ceramic tiles, the woman from reception brings me a half-litre bottle of Georgian beer to drink as I sit in the hot water.

Washed, de-stressed, light-headed, my skin still hot and bright pink, I walk out of the bath-house and wander through Abanotubani, the little cobbled neighbourhood below Narikala Fortress. In a souvenir shop a lady has hidden a barrel of homemade brandy in a corner, and is selling it in plastic Coke bottles.

I ask her if I can just try a sip of the konyak; she fills a cup to the brim and won’t take any money for it. It is sweet, soft, and ridiculously easy to drink.

Clutching the rest of my takeaway brandy, I walk to Tbilisi’s restaurant district, Kote Afkhazi street, for dinner. There is rugby on the TV in the cafe; I have a couple of glasses of Georgian red wine, and at half-time the lady at the bar starts to bring me something light green in a tequila glass – chacha infused with tarragon.

I am completely hammered as I leave the cafe. As I walk back to my hotel, up the steep cobbled hill that leads to Narikala, I’m ready to throw up.

When I get into my room, I see the report on my laptop that I was supposed to work on that evening.

Looking for a place for dinner in the beautiful sandstone lanes of İçərişəhər (Icheri Sheher), a man beckons me through a narrow door in a stone wall. Inside the wall is a cosy round room with a log fire, a low table. and some cushions on the floor to sit on.

I tell him what I’d like to eat, and a few minutes later he brings it from somewhere, with a glass of Azeri red wine.

I stay in the secret stone room for the rest of the night, all on my own, drinking pomegranate wine and heating up from the fire, until I’m so drowsy I can barely stand up to go home.

Yerevan was the quietest city I knew – until the week I found myself in the middle of Armenia’s revolution.

In the days before I arrived in Armenia, anti-government demonstrations had begun in Yerevan. The country’s long-standing president, Serzh Sargsyan, had gone back on his word to stand down, and was about to remain in power. Armenians, especially young people, felt their country going backwards.

The protests escalated in my first days in Yerevan. But there was no violence, no riots. Instead, people began to march through the streets carrying Armenian flags. Cars also clogged the streets and made a noise: everywhere in Yerevan the din of car horns was deafening.

I just manage to meet the people I need to, before the city shuts down for everyone to join the protests. By 23 April there are a quarter of a million people on Republic Square and the streets that lead to it – Teryan, Abovyan, Mashtots Avenue.

When news breaks that the president has given in to the pressure and resigned, I’m in a cafe at the bottom of the ‘Cascade’ steps. I had just climbed up the steps, to see the view over Yerevan with Mount Ararat in the distance. As soon as the waitress hears that Sargsyan has been removed, she brings everyone a glass of sparkling Armenian wine to toast the revolution.

As soon as I finish the wine, I rush back to Republic Square. Now the crowd is celebrating. It’s even louder. 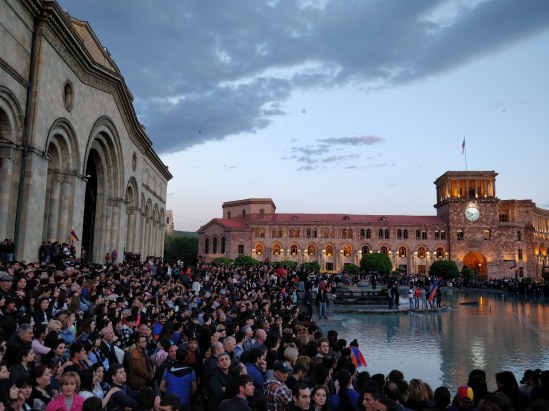 The trains have been some of my happiest experiences in Russia: a comfy space in a first-class carriage, and lazy days and nights watching the countryside pass by – snowy pine forests; villages of wooden huts; eerie wagon yards lit by sinister yellow lamps.

In two nights drifting through the taiga on the way back from Kandalaksha, a town by the White Sea above the Arctic Circle, I got through a bottle of vodka, safe in the knowledge that I would wake up to beautiful scenery and a cup of instant coffee from the provodnitsa.

To help me to sleep after leaving Arkhangelsk, I poured Arkhangelskaya vodka into a tea cup and mixed it with a bright green fizzy drink called Tarkhun.

In Yoshkar-Ola, a stunning town in the republic of Mari El, I got a cup of instant coffee with rum from the vending machine at the station before boarding the train back to Moscow. Sitting on my bunk that night, I finished off the bottle of Stariy Koenigsberg brandy that I had bought in a supermarket shaped like a castle.

After long days bouncing through Moscow’s metro for meetings across the city, I usually fell asleep in the taxi back to my hotel.

To help me wake up in the evenings, I would use the hotel gym, then unwind in the sauna before bed. The sauna was the best bit.

It was a small wooden cabin with a glass door, only big enough for one person to fit inside. After a couple of evenings I discovered a panel in the wall with buttons that change the lighting and temperature, and a radio hidden in the top of the booth.

After my workouts I refilled my water cup with cheap Abkhazian or Russian wine, and put myself in a trance of tiredness and tipsiness under red or green light, meditating to esoteric Russian music: songs I will never hear again, from radio stations that brought all of Russia to a little sauna in the middle of Moscow. 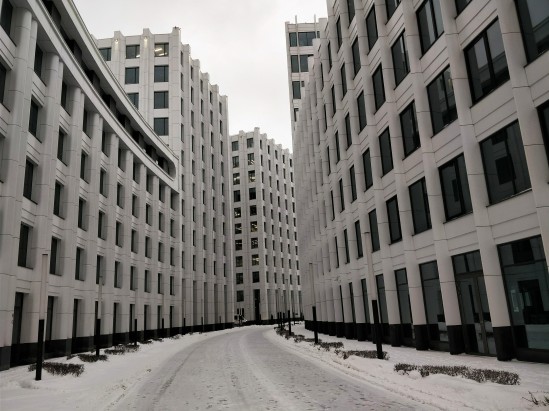 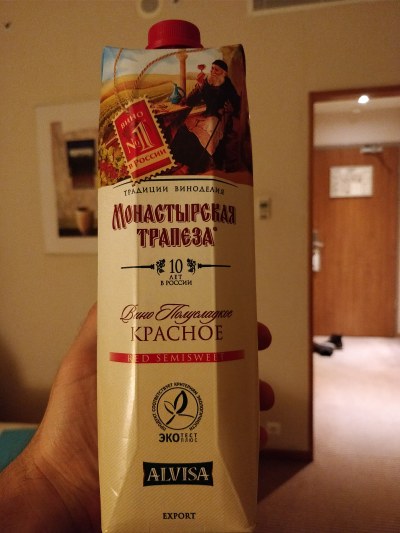 In the centre of Ulan-Ude, between the Lenin statue and the Hotel Buryatia where I’m staying, I find a bar called Yurta – the yurt. It’s dark and drab, and filled with smoke.

Buryat teenagers are drinking vodka around square tables. As I walk in, the soundtrack to this Saturday night in the borderlands between Siberia and Mongolia is Ed Sheeran’s ‘Shape of You’.

It gets much weirder. As I take my plastic pint glass of dark Buryat ale to a free table, a young woman approaches me. Her skin is very pale, clammy and scarred; she is drunk and stumbling.

She sits opposite me and tells me disturbing stories.

Five of her friends were killed in a helicopter crash somewhere in Buryatia last year. It isn’t safe for me to be here; Ulan-Ude’s criminals know the streets outside the hotel, and where the security cameras have blind spots.

Then she takes a napkin, and writes on it: Мир наизнянку. Mir naiznyanku – the world is inside out.

The girl gives me the napkin and leaves me, to talk to two men sitting at the next table. Then the yurt’s two security guards carry her outside.

On my way back to Hotel Buryatia I buy half a litre of Sibbitter vodka from a mini-market, then drink it all in the bath in my room. 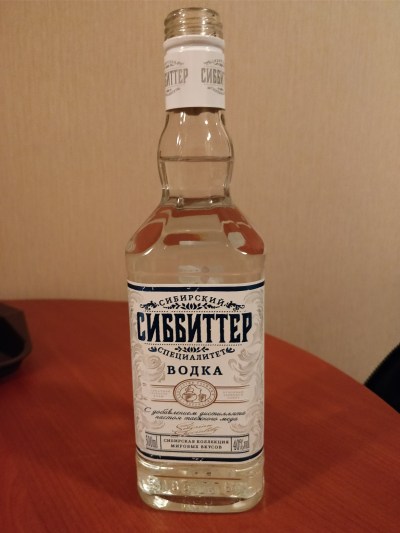 I don’t need the gulps of Uzbek konyak to make me light-headed. I’m still dizzy from the day just gone.

At one of my meetings with a drinks importer I mentioned that I’d like to go to Chorsu Bazaar, one of the biggest markets in Central Asia, while I’m in Tashkent. Early the next morning the company’s driver is waiting for me outside my hotel to take me there.

When we arrive at Chorsu, Bakhtiyor gives me an envelope stuffed full of the company’s money, and then spends the day showing me every part of the huge bazaar – which foods to try, which people to talk to, which things to buy.

Bakhtiyor buys us lunch in a canteen at the bazaar, then in the afternoon he takes me to Khazrati Imam mosque. At the end of the day we drive to his company’s store, where he asks me to choose two bottles for myself as extra presents.

In the restaurant at my hotel that evening, I order a glass of brandy to go with my dinner, and try to make sense of what had happened.

I dreamed of visiting Kyrgyzstan for 12 years; it had almost become an obsession. So my first night in the country, my first walk and first meal, all have to be epic.

I find an upmarket Arzu restaurant in the neighbourhood, and treat myself to an enormous plate of spicy laghman noodles. It begins to snow outside – wet flakes that hurtle across the windows, but only turn Togolok Moldo street to slush.

The most decadent end I can think of to my first night in Bishkek is ice cream, a double espresso and a large glass of local brandy, called Kyrgyzstan, to toast myself for finally being here. 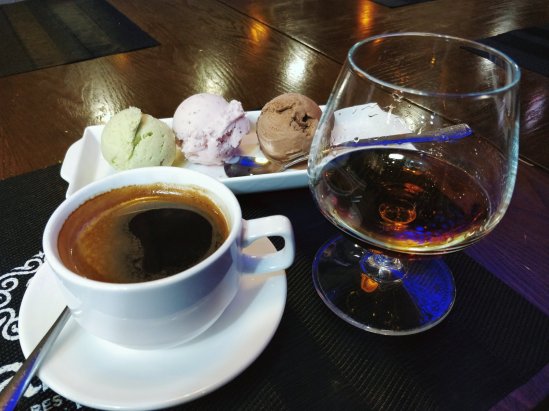 In all my best stories from Kazakhstan I’m drinking tea – or camel’s milk. The first Kazakh alcohol I drank was a whole bottle of Zhar-Zhar wine; but unlike most of the times I have been drunk in the post-Soviet world, I can’t remember what happened next.

One thought on “Getting drunk on my own in the former Soviet republics: Confessions of an alcohol analyst”