On a hot October Saturday, as a scrum of players lunged for the ball bouncing head-high in the midfield, a match in Bulgaria’s Third League – a 71-team competition divided into four regional groups – played out in the universal rhythm of amateur football: frenetic and slow at the same time.

On some rusty blue benches between the changing rooms and the stadium’s running track, 40 spectators chatted and nibbled pumpkin seeds, half-watching their friends and relatives exhausting themselves on the pitch.

In an early-evening, early-autumn kick-off at Nikolai Laskov Stadium in the town of Yambol, the game between Tundzha Yambol and Chernomorets Burgas – mid-table rivals in the south-east group of the Treta Liga – ended in a 3-0 win for Chernomorets. The visitors were by far the better team, and scored through an own goal before half-time, then impressive goals by Martin Dimitrov and Milen Tanev in the second half. … END_OF_DOCUMENT_TOKEN_TO_BE_REPLACED

There can’t be many places in Europe more colourful than Bulgaria’s Thracian Valley – the basin of the Black Sea in the country’s south-east, just above the borders with Turkey and Greece.

Yambol – one of the region’s main towns, with about 70,000 people – is full of colour, from its 19th century houses painted in bold reds and apricot orange, to its yellow Orthodox church, to the park in the centre of town covered by a canopy of dark green leaves. Colours mix on shop signs and graffiti, and in the brickwork of the 14th century Eski mosque – the second biggest in Bulgaria.  … END_OF_DOCUMENT_TOKEN_TO_BE_REPLACED

The way Bulgaria feels and looks is anything but socialist. And in this changing part of southern Europe there are few places that have been renewed and invested in as much as Yambol – a small town in the Thracian Valley, an hour inland from Burgas on the Black Sea.

But still, in a few corners of Yambol survive some symbols of the Communist era – a left-behind but quite recent past. A brutalist building, just off the central Targovska street, still houses an art gallery. The square outside the gallery is only two minutes from the town’s old central post office, at one end of Rakovska street. And then there are all sorts of decades-old murals, mosaics and shop signs, which look more and more jarring with every sparkling new cafe that opens up next to them.

Communism is an aesthetic now. These days Bulgarians walk past the past without noticing… … END_OF_DOCUMENT_TOKEN_TO_BE_REPLACED 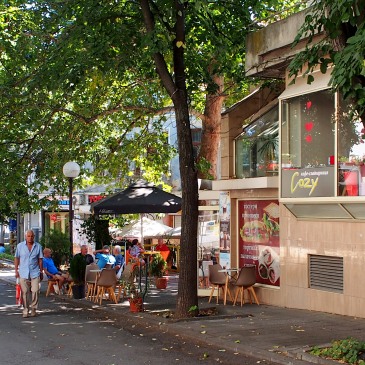 In the scorching heat of summer in the Black Sea basin, the centre of Yambol – a town of 70,000 people in Bulgaria’s south-east – is a soothing blend of elegantly painted buildings, serene blue skies and pretty tree-lined avenues. From morning until night her two main streets – Rakovska is new and trendy; Targovska is old and tranquil – are full of people, young and old, basking in the shade of outdoor cafes.  … END_OF_DOCUMENT_TOKEN_TO_BE_REPLACED

Yerevan used to feel like the most relaxed city in the world – until the week I was caught up in Armenia’s revolution. … END_OF_DOCUMENT_TOKEN_TO_BE_REPLACED 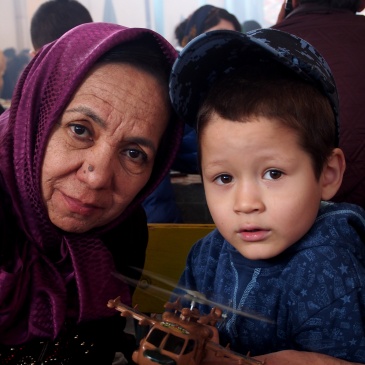 It was lunchtime at Chorsu Bazaar, and the wooden benches of the choykhona were filling up with hungry families. The room was dark from the smoke of cigarettes and shashlyk. I took a space opposite an older middle-aged couple, sitting with a boy of about six. … END_OF_DOCUMENT_TOKEN_TO_BE_REPLACED