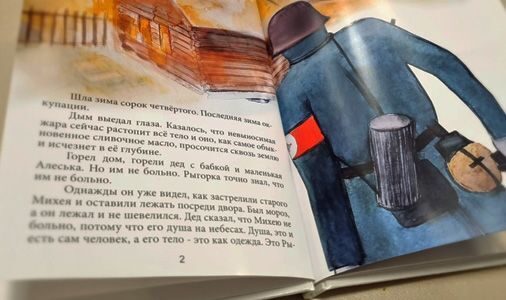 It was the winter of 1944. The last winter of the occupation.

The smoke was gnawing at their eyes. It felt as if the unbearable heat would take their bodies any second, and melt them into the ground, like a block of butter.

Once, he had watched as they shot old Mikhei, and left him in the middle of the yard. It was freezing, and he just lay there, not moving. Ryhorka’s grandpa had said that Mikhei wasn’t in any pain, because his soul was in heaven. The soul is the essence of a person, he said, and his body is like his clothes. Ryhorka knew this too. So his grandpa, grandma and Aleska weren’t hurting, because their souls were already in heaven. And Ryhorka was here. What would he do now, on his own?

The caustic smoke forced itself into his mouth and nose. He could barely breathe.

In February I translated a short story set at the end of the Second World War – Belchonok (Little Squirrel) by the Belarusian author Andrei Geraschenko. The story was written and published in Russian in 1992. Told through the death of a small Belarusian boy, killed during a Nazi raid on his village, it is an affecting and thoughtful piece of writing about one of the tragedies of war: that the soldiers who kill children are often fathers themselves.

Two weeks after I finished the translation, the Russian army invaded Ukraine. Russia’s horrifying war has already killed thousands of innocent Ukrainians – including hundreds of small children – and destroyed lives, towns and cities across Ukraine. Like in 1944, the lands next to Russia’s western border are again occupied and ruined; but where in Little Squirrel the enemy is European, the evil now comes from Russia itself.

The tragedy is painful to process. Ukraine was my home for three years: I lived in Kyiv, and often stayed near Luhansk, and later, in Odesa. I have also spent parts of my life in Russia. Geraschenko’s story – about merciless soldiers; about an orphan desperately clutching a cuddly toy; about the sickening shame and inhumanity of war – now speaks to me about people and places that I know.

A Belarusian publisher is bringing Little Squirrel to readers in Europe. The story is being translated and printed in 16 languages. It also has its own website, at belchonok.by, which includes illustrations, the translations in other languages (and the original Russian), and a 15-minute audiobook.

My English translation can be read on the website here.

Jonathan Campion is a writer, a translator from Russian and Ukrainian, and a book editor. He has travelled in Eurasia since 2005. Read about his work here, and contact him here.